Today we tackle the QUINNSPIRACY. It’s advanced in a long and presumably unpleasant video that I refused to watch – which is saying something, as for this blog I’ve watched clearly unbalanced individuals claim that WWII, the moon and planes are hoaxes without a second thought.

The basic gist of the argument seems to be, game developer Zoe Quinn had sex with five men and this proves gaming journalism (which is essentially an enthusiast press that regurgitates press releases) is forever corrupt. The game critic she corrupted reviewed her game Depression Quest approvingly – wait, no, he actually didn’t review the game. And the game is free so Zoe’s not making anything off it.

The issue here appears to be that people within an industry know each other and are friends. If that makes gaming corrupt, then every industry is corrupt. Unless you believe that Oscar voters don’t cast votes for their friends.

The movement against social justice warriors (a thing that does not exist) has no name, thought it overlaps with more traditional regressive movements like MRAs.

People like Anita Sarkeesian, that dastardly villain who raised money for a project and then made it just as promised and yet is still somehow considered a fraud for no apparent reason, have posted some of the harassment they’ve received. Naturally, this is denounced as false. Clearly one image being fake proves online harassment isn’t real, even though you can easily find it by searching on Twitter – and all those journalists who quit were just faking the harassment they received too.

Again, the criticism here seems to imply something untoward…about people within an industry being friends with one another.

Why do gamers care so much about gaming journalism? You don’t see scandals from moviegoers about how bad the reporting on Ain’t It Cool News is. You don’t see calls for movie critics to cover sex scandals. You didn’t see Roger Ebert covering Brangelina.

But we’re here to discuss conspiracies. And supposedly, there’s an even grander conspiracy by feminists to destroy gaming with their wicked censorship.

First, a warning: no one on the internet understands what free speech or censorship are. You don’t have any inherent rights to free speech online (“Congress shall make no law…”); voluntarily responding to criticism with edits when you could have refused without any compulsion is not censorship.

Here’s the proof of the conspiracy:

Yes, I think it was ridiculous to take offense at this and it should have stayed in. But no one was forcing the developer to do this; he could have said no and just ignored the people. But, of course, criticism of something is hideous censorship and an offense to free speech in and of itself. 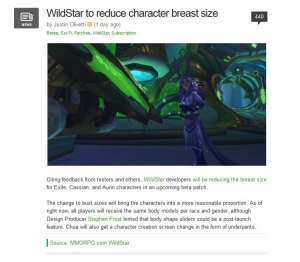 Game dev responds to feedback by doing something 100% voluntarily! WHAT A CONSPIRACY.

I wonder if these people realize how creepy they sound when they protest shit like this. I once saw a discussion about some RPG on the 3DS where they made an underage, child-like character less naked and everyone responded by acting like THIS IS AN AFFRONT TO FREE SPEECH.

Developers disregard the “majority opinion”. To which I say, good. A private company is not a fucking democracy. You don’t have any control over it. They can do whatever the hell they want and they can respond to or ignore whichever criticism they like. If you don’t like it, become the company’s CEO or buy stock and then your opinion has automatic importance. Until then, you’re at their mercy.

This one isn’t even theoretically censorship. No pressure was put on him. Their proof of a MASSIVE FEMINIST CONSPIRACY DESTROYING GAMES is…a developer making you play as a woman! A woman who isn’t white. This is just as bad as when those radical feminist social justice warriors bullied Core Design into making you play as a woman in Tomb Raider. And I wonder what they did to Telltale Games to make the two playable characters in The Walking Dead a black man and a girl respectively.

Christ, I’m not even showing you the next one. It’s about how Fire Emblem covered up a woman’s ass. Why she was nearly naked in the first place, I don’t know. What Nintendo does could almost be called censorship: certainly, their strict prohibitions on topics like religion or alcohol in even third-party games were censorship. But god, who cares about one shot being slightly edited in a game that’s notably not about staring at women’s asses.

Isn’t this bizarre, by the way? These people are opposing censorship by…demanding that the people who make the games not change things they want to change? What?

I don’t even know what to say to this. GAME CRITICS LIKE GAME WITH FEMINIST THEMES? Do you have to be a corrupt game critic if you like this game, because I know people who liked it and they aren’t game critics. Hell, I own Gone Home on Steam, though it’s deep in my unplayed backlog.

I think I’ve seen people elsewhere object to critics liking small indie games over big AAA titles, which, what do you expect? Film reviewers do like some blockbusters (the Marvel ones, for instance), but of course they generally prefer a Boyhood over the latest Transformers. TV critics lavish praise on cable dramas, not NCIS. Book critics don’t act like the latest romance novel is the best book of the year. 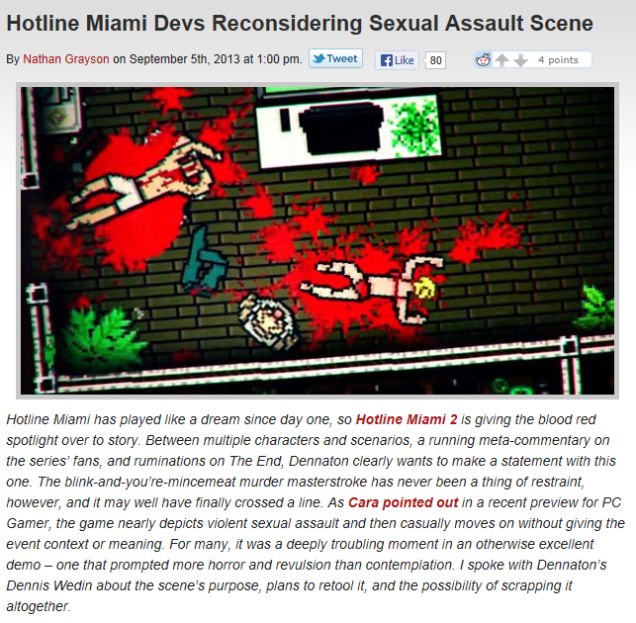 GAME DEVELOPERS CHOOSE TO CHANGE SOMETHING ABOUT THEIR OWN WORK. Those feminists strike again with their oppressive, 100% voluntary censorship! 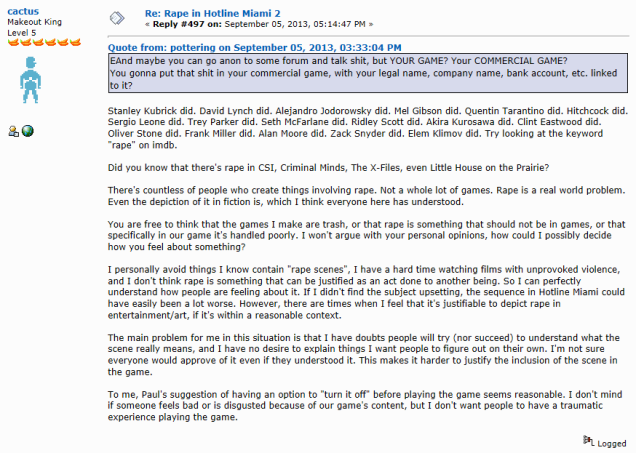 And this just proves the point: a developer responds calmly to why they think the scene is justified. Censorship!!! 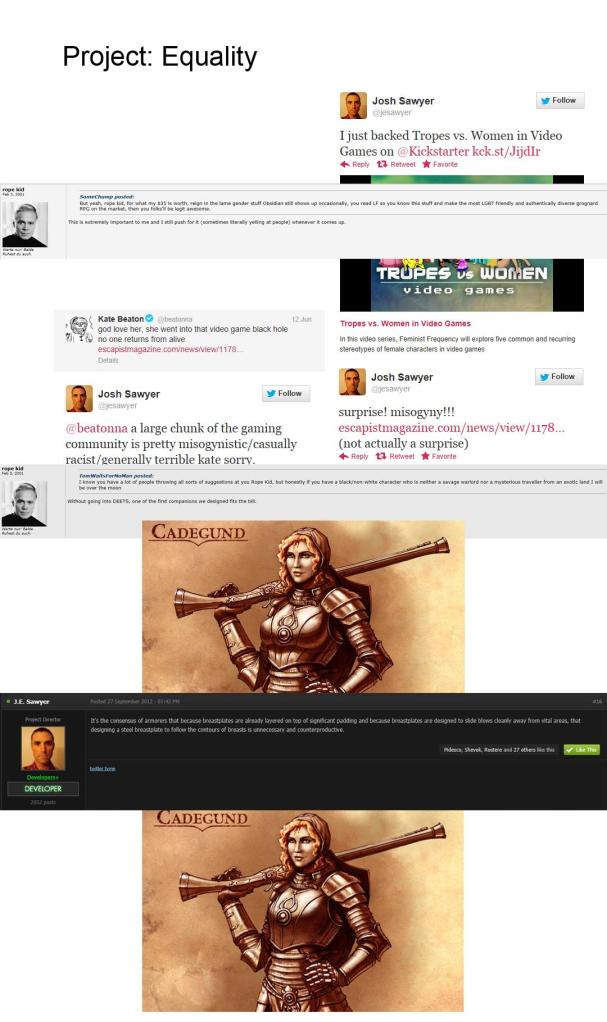 Again: work on your branding. Saying your enemies want equality is not exactly a stinging insult.

So what we have here is, some people who choose to use their own money to back a project on Kickstarter, and some people who changed a character design after it was pointed out that part of it was inaccurate. Uh…ok? 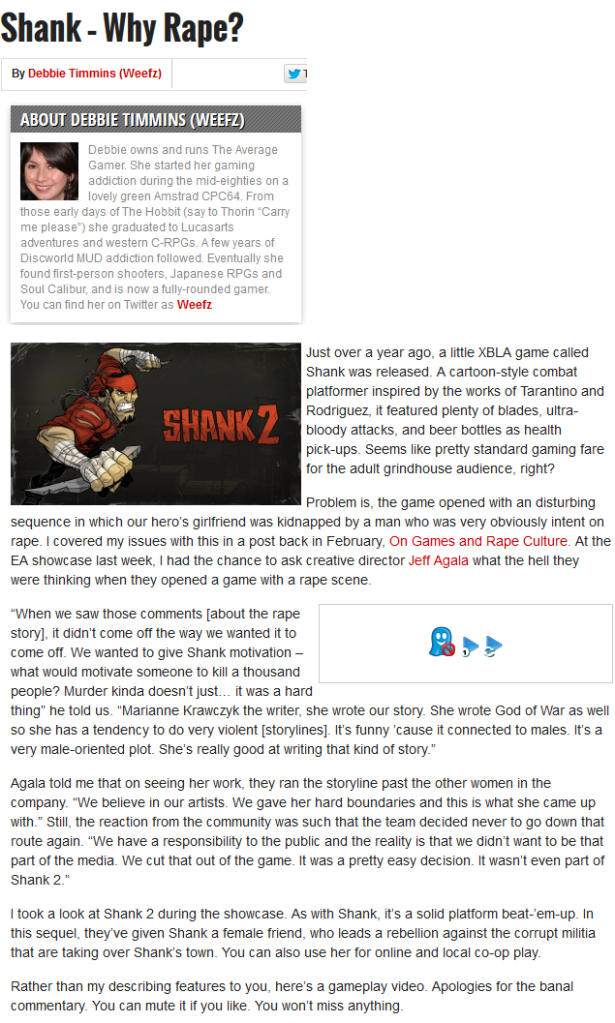 Someone criticizes an element of a game. The developer responds. Then they go on to discuss the game.

Again, it’s bizarre how developers making decisions about their own work is treated as some kind of censorship. Here we have an internal decision made within a company and it’s being held up as An Evil Act of Feminist Oppression. What the fuck?

Someone criticizes part of a game. Developer responds and chooses freely to do something about it. Again, absolutely no censorship took place here. NONE.

Someone criticizes part of a game. Developer responds and chooses freely to do something about it. Again, absolutely no censorship took place here.

Someone criticizes part of a game. Developer dismisses concerns freely. Someone apologizes for interview. They didn’t have to apologize and this is honestly a boilerplate “I’m sorry but we’re listening” apology that doesn’t really say or promise anything.

Game developer advocates for diversity, does it in their own video games. Uh ok.

GAME DEVELOPER DISCUSSES CHOICES MADE IN THEIR OWN GAME, WHICH THEY CREATED, WHICH THEY LEAD DEVELOPMENT ON, BUT SOMEHOW AREN’T ALLOWED TO MAKE DECISIONS ON IF IT’S PROGRESSIVENESS BECAUSE THAT’S JUST SELF-CENSORSHIP, OR SOMETHING

Medieval POC can have a shaky grasp on history, even if their heart is in the right place. Personally, I find it baffling that someone would focus on POC in Europe instead of talking about, say, history in Africa or Asia or the Americas at the time and promoting non-European history. 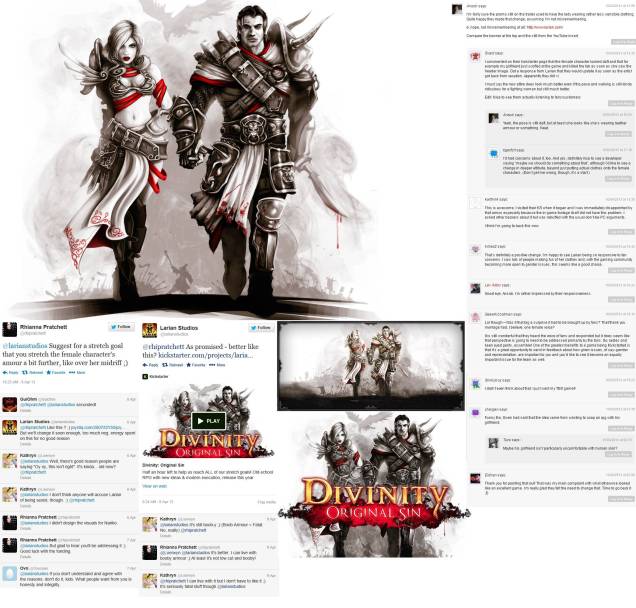 Terribly designed armor used to be widely joked about, but now it’s apparently a serious issue.

These images were posted on Reddit under the name “Have you heard about how social justice activists/warriors are planning to kill gaming? Well, it turns out that’s wrong. They’re not planning. They’ve already been working at it for years”. But I don’t see anything here that’s even bad.

I see game developers choosing to change things about their games, and some who didn’t. Only the Nintendo one actually counts as any form of censorship: there was no pressure or serious coercion in any of the other examples. No one’s free speech was hurt because free speech is a public right and doesn’t apply to any website or video game.

More disturbingly, you have entries like the Eldritch one. It isn’t even a response to criticism. Just including someone who isn’t a white guy as a protagonist is seen as a plot to destroy gaming. Diversity is wrong to these people.

Who are these people? Earlier I said there’s no term for them. But they’re angry and young, with limited experience of the world outside gaming. They don’t realize that, yes, people within an industry are often friends – and even sleep together. They practice a social conservatism laced with misogyny but devoid of the religious thread seen in Republicans, but with petty judgment. If a female character is changed to be less sexually appealing, well, that’s an affront to freedom of speech! It’s like a creepy version of the War on Christmas shit trotted out by FOX News every year.

Anyone who’s not like them, or who doesn’t think like them, is just wrong in their eyes. Expressing opposing opinions is censorship. They don’t get that game developers have creative agency over their own work and believe every change they make in response to criticism is the work of those evil feminists. Unless a developer responds to criticism of, say, microtransactions or poor DLC and removes them. Then that’s just a sign of the power the people have!

What I see up there is not an attempt to destroy gaming. I see increasing acceptance of diversity and a drive for inclusiveness; I see people thinking about their creative works and taking them seriously; I see vibrant use of free speech, not its repression.

P.S. Comments are off. This blog is not a free speech zone.