A semi-serious resurgence of flat eartherism is going on all around us, a veritable golden age of theories debunked in the Bronze Age. And it’s now spread to Reddit.

One user, whose submissions are otherwise full of r/conspiracy’s typical anti-Semitism and Pizzagate ravings, also spreads the Flat Earth Gospel to a mostly hostile audience. 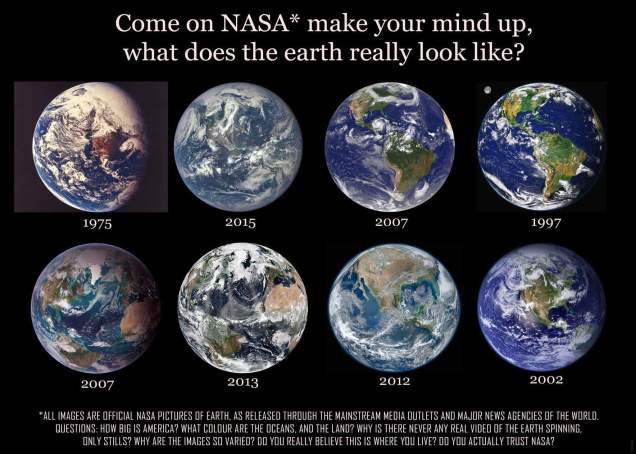 The Earth somehow looks different in different photos taken across a period of forty years. This is of course a sign of a conspiracy, since camera technology’s famously hasn’t changed since 1975. The only other explanation is that these photos represent a wide array of photos, taken by different cameras, with different weather on earth, at different angles and distances, and with some being acknowledged composite images, but who would believe that? 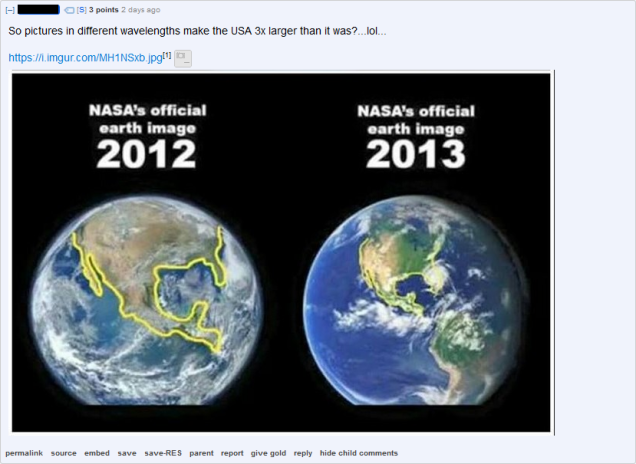 His big sticking point seems to be the size of North America: his perpetual refrain in response to criticism is that “US too big!!!”. After all, sizes are absolutely constant from all angles and distances.

They also link to a website about the “NASA Occult conspiracy”: 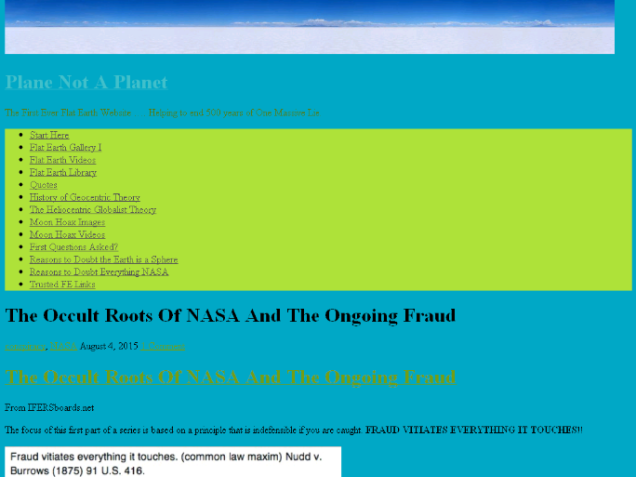 Unfortunately, I won’t be able to read this site, on account of now being blind because my god that color scheme

The user’s other posts have delightful titles like “NASA gets pwned from a camera bought at Walmart with video showing FAKE PLANETS and fake stars”, “If the shortest distance between two points is a straight line then WHY is there NO FLIGHTS over South Atlantic Ocean?” (with every comment pointing out many, many non-stop flights from South Africa to Brazil or Australia), and “The “Northern Lights” are proof we live under a dome/firmament”.

Could I actually try to debunk these theories? Yes. Should I? Fuck no. Life’s too short to spend time arguing with people who sincerely believe the Earth is flat, and for once the denizens of r/conspiracy agree.