Yeah man, you’re really annoying the leftists by saying something dumb and getting called dumb before everyone moves on with their life.

Paul Joseph Watson is a tough rebel, an iconoclast who fears nothing – except for soybeans.

“Soy boy” is the latest term to spread like wildfire through the alt-right/InfoWars/terrible internet dude scene. Like all of their terminology – from “cuck” to “virtual signaler” – it’s treated as a devastating insult by those who use it, and is heard by everyone else as meaningless horseshit. Just like Watson’s own personal catchphrase, “imagine my shock”. Wow, buddy…I’m starting to think you aren’t really shocked, or something.

Soy feminizes men, Watson says. “You’ve probably seen the Buzzfeed Try Guy video where they measure their testosterone”, he goes on, apparently not knowing what “probably” means. I don’t think I’ve ever googled “testosterone levels of the staff of a website I dislike”, but then again I haven’t shilled even one dubious brain pill.

Watson thankfully includes a two-minutes-hate of feminist men who made a Tweet he dislikes, who also once tweeted about eating soy. Frantically searching for signs your enemies ate a food is a perfectly normal activity. Who hasn’t done such a thing? As you’d expect, this montage ranges from political celebrities to just random nobodies who made a bad Tweet once. Also, he takes a chance to be xenophobic about refugees, because of course.

You’d also expect random cuts to things we’re just instinctively meant to understand as bad. For example, Watson cuts to a woman – unnamed, and never mentioned in the video – saying “I’m triggered”. You sure showed…uh, whoever that was. He also cuts to Jeb Bush. Hasn’t JEB! suffered enough?

The crux of Watson’s theory is that soy contains estrogen. Babies are being fed a soy milk formula, and thus there’s a grand theory about how there’s a plot to raise a generation of Soy Boys. A terrifying world where boys are, uh, feminine a bit, maybe? The implications are truly not that troubling, honestly.

Soy boy outrage ran through the alt-right like a wildfire. Perhaps its finest result was leading 4Chan users to drink onion juice to offset the “effects” of soy and regain their manliness. Stefan “once posed as a woman online to agree with himself” Molyneux compared the consumption of soy to the fall of Rome.

But by and large, “soy boy” has become just another insult thrown about by the alt-right, a sign of cutting wit to them and a sign of meaningless, braying jackassery to everyone else. There’ll be a new one a week from now, and it’ll be just as confounding. But at least we can take pleasure in the fact that this one hurt 4Chan literally.

Nessie, Area 51, Roswell: names like this define UFO and paranormal lore. This is not a series about them. In Distant Encounters, we tour the strangest, most isolated tales of encounters with the unknown.

Skinwalker Ranch is a fascinating little footnote in UFO lore. A ranch near Ballard, Utah, it gained fame in the mid-90s when a series of stories by journalist George Knapp in the Deseret News documented strange events witnessed by its new owners, the Shermans. The Shermans reported seeing:

…three specific types of UFOs repeatedly during the past 15 months – a small boxlike craft with a white light, a 40-foot-long object and a huge ship the size of several football fields.

But Skinwalker Ranch truly enters UFO lore when the National Institute for Discovery Science, a paranormal research organization founded by businessman Robert Bigelow, acquired it in 1996. The NIDSci folded in 2004 after discovering precisely jack shit.

Yet a faithful remains, and today’s story concerns one of the many entities detailed on the Skinwalker Ranch’s delightfully Web 1.0 website. Despite being maybe the most-researched UFO hotspot in the world, photos of the Ranch’s alien entities – which include sentient mist and alien portals – mostly document just one unearthly being.

This “dire wolf” like creature has long dirty mangy grey/black hair.  Has a proud, intimidating, and intense like presence.

At this time I am unsure if it is hostile or friendly, my impression was neither more majestic and to be feared in nature.

I wasn’t sure if the wolf was hostile, so I shot at it as much as I possibly could.

A scary wolf with the fluffiest tail in the world!

Has a penetrating stare, but is unable/unwilling to communicate verbally or psychically.

This wolf must be an alien: it’s incapable of the speech and telepathy normal wolves are famed for.

Said to show up about %15 of the time, the bulletproof wolf is oddly the subject of nearly all entity photographs. 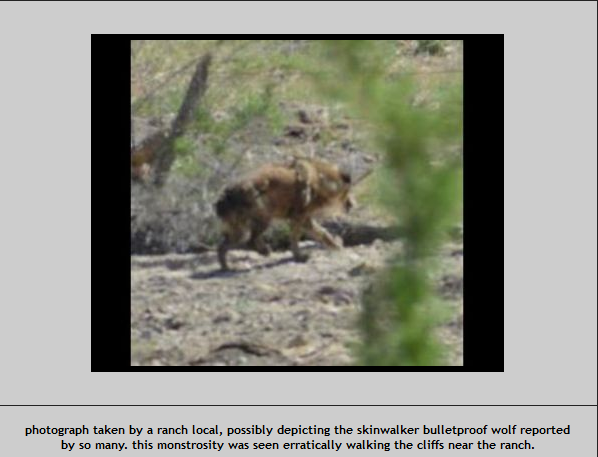 Look at this goddamn monstrosity, um, walking. Away from us. What is this dastardly alien direwolf planning?

How could there possibly be a reddish-furred, bushy-tailed, wolf-like animal in the Southwestern United States? If such a thing existed, science would know about it.

…yes, I recognized it off the top of my head.

If you enjoy swiping from better-known legends, you’ll enjoy the Skinwalker Ranch’s Youtube channel, which includes videos on the Paulding Lights and New Jersey’s ghost car.

That’s not a bulletproof wolf. It’s a testament to your inexplicable inability to either identify or shoot coyotes.

If you’re curious as to the site’s records of other, less wolf-adjacent entities, here’s a photo of one of its famed alien portals opening.

And that tells you everything you need to know about Skinwalker Ranch.

r/incels was toxic and misogynistic by Reddit standards, and I don’t think I’ve ever seen a more terrifying sentence. It was a place for people to congregate to yell about how much they hate women, and then wonder why women won’t sleep with them. It was every nasty, sexist tendency of toxic masculinity-fueled, entitled young men shoved – or, you may say, quarantined – into one hellish place.

Reddit banned r/incels, acting swiftly to stem the tide of such terrible behavior by waiting nearly two years to do literally anything. But let’s not be churlish: Reddit actually Did A Good for once, and we should applaud them, and also ask them to maybe be a bit faster next time.

And on a personal note, I also applaud…myself! Because even though I heard about how awful r/incels was, I never once looked at it. For once in my life, my drive to find something terrible & gaze deeply into it from afar, like a pig wallowing in mud, was defeated by my mind’s self-preservation instincts. Go me! But now I must pick over the fragments of r/incels’ fetid corpse.

Incels, short for “involuntary celibates”, are some of the worst people on the planet – again, they stood out as terrible on Reddit, a kind of zoo for disgusting male subcultures. At their best they appear to have spent time raging against literal strangers maybe having sex, asking profound questions like “why do women like men who are nice and considerate, and don’t spend all their time insulting women on the internet?”. Truly the mystery of our time. Earnest displays of joy and happiness were anathema to them, triggering bizarre and terrifying displays of revulsion.

At their worst, incels are genuinely criminal, often condoning rape – even outright discussing how to get away with it. r/Incels was a vile echo chamber where misogynistic ideas were reinforced and deepened by an insular community. Angry, entitled misogynist dudes still have places to congregate – for example, Reddit – but they have one less place that’s for them – and that’s why we should celebrate its ban.