“Wisconsin has the highest proportion of eccentric environments in the USA, more than 10% of the total.” – Jan Friedman

Since the demise of Time Cube, I’ve become nostalgic for the early, more personal days of the internet. Before social media was around, before content was shuffled towards a few overarching services. Things that are now Twitter feeds and Tumblr blogs would once be a gigantic number of individual, single-topic websites and forums, an array of personal homepages and strange blogs stretching off into eternity. You might stumble across a weird Subreddit now, but at least it’s cloaked in the familiarity of a larger site. Finding one of the web’s oddities once meant entering into an alternate world, created to mirror the author’s mind.

I once enjoyed browsing these websites. I heard about them on the old Snopes message boards, or places like Crank.net and the Museum of Hoaxes, or through long lists of links on places such as the Insolitology or even the Sci-Fi Channel.

I don’t know where I found today’s website. It’s one of several sites describing the many oddities of Wisconsin. I’ll detail the others in future Flashback Fridays; bizarrely, while today’s site is defunct, the other sites that are still up look way more outdated.

What do you think of when you think of Wisconsin? Cheese? Beer? Serial killers? The Fonz? How about the Beast of Bray Road, the werewolf that calls Elkhorn home? Or the Hodag, a reptilian beast made up in a failed attempt to make Rhinelander interesting? Those are just the obvious legends about the state. Today’s site looks at the deep cuts.

The now-defunct Weird Wisconsin last updated in 2004; it vanished some time in 2006. Presumably inspired by Weird New Jersey, it’s home to many accounts of Wisconsin’s paranormal phenomenon, and wonderful images like this: 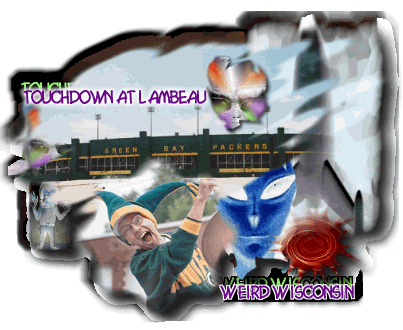 END_OF_DOCUMENT_TOKEN_TO_BE_REPLACED

I have long chronicled the absurdities of the conspiracy theorist movement here on the Space Lizard Report. I’ve covered 9/11 truthers who think a viral ad is real, blurry bald people being mistaken for alien Voldemorts, and a very, very high Youtuber who believes every war is a hoax. I’ve looked at people who think feminism is a conspiracy and the delusional nerds of GamerGate, who see everything as feminist “censorship” of video games. How the Moon is a hologram. And also whatever the hell this is.

Yet last night I realized a terrible truth. Everything these people said was true. Only I realize the truth. For you see, I am the Son of the Godhead. And reptilians rule the world.

They’ve taken over all world leaders. The Queen of England. Barack Obama. Zlatan Ibrahimović. They control the media, but I’d like to reassure you that it’s not a racist thing. My followers may make it a racist thing, but to me it’s just reptilians. Horrible reptilians.

If you don’t believe me, then just witness my patented process to PROVE someone is a secret reptilian. END_OF_DOCUMENT_TOKEN_TO_BE_REPLACED

Reptilians are maybe the best conspiracy theory there is. Sounding like something conceived of during a stoned marathon of V, and created by a soccer commentator who now gives six-hour long speeches to packed houses in Wembley (…Arena), it claims that the course of the world is decided by evil reptilian aliens posing as influential people. So it’s sad to see this delightfully absurd idea fade away in a time where conspiracy theorists mostly just deny things.

But a Youtuber named Reptilian Resistance has discovered a shocking secret in a video of “Barrick” Obama, and it’s perfect, just perfect.

“The cameras spotted a very odd individual who may be with the US Secret Service or Israel’s…and could be strong evidence of a shapeshifter alien humanoid working for the Powers that Be, caught in a high definition video during an event of the Zionist cabal.”

See, a poorly lit bald man is seen in the crowd. So he must be a reptilian! Who’s shapeshifting in front of a crowd of thousands, on live television! Those sneaky reptilians. And he doesn’t have a nose! Why, he looks a lot like Voldemort. Good thing Joe Biden’s here to put on his robe and wizard hat and defeat this dastardly dark wizard – what, you didn’t know that Joe Biden’s a wizard? Well, can you prove he isn’t?

Awesomely, the video zooms in extremely close on the anonymous bald guy; the video’s computer voiced maker apologizes for the distortion, but thinks their case remains clear.

“Did his shapeshifting device fail during Obama’s speech? …Is he an actual reptilian humanoid, is he one of the Annunaki? Is he a tall grey bio-android, or what?”

I mean, let’s keep our options open here. You don’t want to rush to conclusions when you’re saying

The Anunnaki are Mesopotamian deities and the technical term for reptilians. Because of course ancient aliens would work their way into here somehow.

“Is that video evidence that the Illuminati elite is in bed with at least one ancient extraterrestrial race, hidden in plain sight and pulling the strings of mankind?”

This tactic does not work here.

This is an older video and, hilariously, the White House was asked to comment on this video alleging that they have reptilian Secret Service agents. Please go read the answer they gave.

“This document is the alleged result of the actions of one or more scientists creating a covert, unauthorized notebook documenting their involvement with an Above Top Secret government program. Government publications and information obtained by the use of public tax monies cannot be subject to copyright. This document is released into the public domain for all citizens of the United States of America.”

Lately, conspiracy theories have been depressing. A lot of bigotry and people eager to write off tragic incidents as “false flags”. What happened to the aliens-and-Area-51 conspiracy theorists of yore?

Well today I bring you all something truly magical: documents about life on other planets, supposedly from an official of some shadowy agency. It’s just one of many documents on a wonderful site I must explore in the future. END_OF_DOCUMENT_TOKEN_TO_BE_REPLACED