Beyond the normal reaches of our society lies an endless array of others: some living, some dead; some known, some obscure. This is about the fringe of the fringe.

A quick definition of terms. Otherkin, or “kin”, are a subculture that identify as nonhuman. This is commonly a spiritual, “I was this in my past life”, identification, but some Otherkin believe their identity is psychological in nature. Otherkin traditionally identify with fictional creatures, such as elves, dragons or fae. A closely related concept is therianthropy; therians instead identify with animals that, whether currently living or extinct, exist. A relatively new addition to the nomenclature are “fictionkin”¹, who identify with fictional characters; unlike Otherkin or therians, many fictionkin identify with beings that, while fictional, are generally human.

Otherkin and therians claim to experience their identity in different ways: via memories, and via “shifts” – commonly mental shifts in behavior, sensory shifts in perception, or “phantom shifts”, where they feel their identity reassert its body via phantom, ie mental, limbs. It is important to note that Otherkin and therians do not claim to physically change, and so-called “p-shifters” are usually a laughingstock in the kin community.

Though today it’s seen as a youth subculture, Otherkin trace their origin to the burgeoning pagan & new age movements of the 1970s. An invaluable timeline by Orion Scribner places the first group that we would today call “Otherkin” in at least 1975, when a group called the Elf Queen’s Daughters placed their first public ad in a pagan quarterly. The term itself dates to 1990, invented as a catch-all for the many non-elven identities Otherkin now possessed; therianthropy found a name and a home on Usenet circa 1994.

But all that can wait. Today, we’re zeroing in one specific facet of the Otherkin community: a elfkin subculture with an involved mythology that flourished briefly, but brightly.

The Elenari started on now-lost mailing lists in the late 90s; in 2000, a newly-created site called the Elenari Nexus became the community’s home. 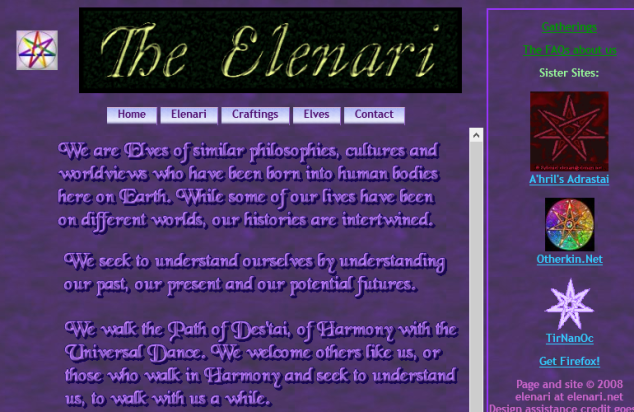