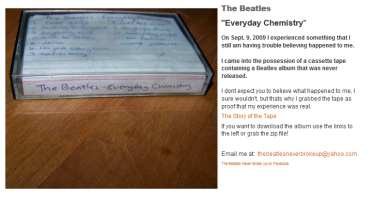 In the immortal words of Jerry O’Connell, imagine if you could travel to parallel worlds. The same year, the same Earth, but everything else is different. Imagine a world where the Soviets rule America, or where ketchup is purple and the Beatles still exist.

Such a story was told by a man calling himself James Richards, who launched a website in 2009 detailing his journey into a parallel world – and he brought back evidence of his bizarre trip. END_OF_DOCUMENT_TOKEN_TO_BE_REPLACED